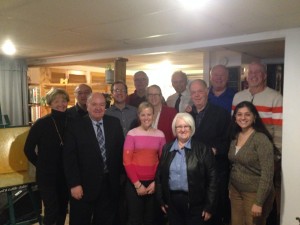 The Board of Directors

President  Wendy DeSouza Wendy has witnessed the evolution of Nazareth house from approximately 2000 until now, first as an observer/helper with Father Walsh, then as a board member in 2009. Wendy is blessed to have known several of the key people who made Nazareth House a home – Dennis & Lucille Hadley, Sister Georgette Coté, Bob Bechard.  With this experience behind her, she has served as board president from 2010 to present. Wendy is a proud citizen of LaSalle where she lives with her husband of 21 years and their 15 year-old daughter. She works part-time as secretary for the Christian Community of St. John Brébeuf in LaSalle and as geographer for the Archdiocese of Montreal. At St. John Brébeuf she enjoys singing with the Folk choir and being a member of the Social Justice Group and the Catholic Women’s league. Wendy also loves hiking, biking and travelling and appreciates the arts, music, photography and watching a great soccer game! Treasurer Douglas Best Long-time volunteer, providing accounting services for Nazareth 2 full days per week as well as with other non-profit organizations. Honorary President Father John Walsh “I have always felt I was a fellow traveler with the homeless. I have no permanent home. Someday I hope I will. I have traveled many roads. The truly sacred is found in the fragile and broken lives of women and men who teach the world that we are one humanity so fragile and broken. My faith and hope are in the mystery of love I find all around me but nowhere more tangible than at Nazareth House and soon at Anne’s House.” Secretary Elizabeth Corker Married, mother of three, long time Hudson resident, former town councillor (1993-2005) and Mayor (2005 – 2009), entrepreneur. “Early childhood abuse, homeless in London just before WWII, and the untimely death of her 1st husband at age 24 all contributed to my mother’s manic depression, a condition that would haunt her for her entire adult life. Life events can have a profound effect on all of us, especially those suffering from mental illness and who find themselves homeless and seemingly without hope. I am proud to be a part of the Nazareth Community, helping those who are less fortunate than us by ensuring there is a secure and safe environment for them at Nazareth House & Anne’s House”.

Robin Burns “I am currently retired, but still have my hands in many business ventures. I have been married to my wife Frances for 47 years, with three children, Tracey Lee; husband Greg, Randy with wife Sue, and Todd with wife Diane. I am blessed with nine grandchildren, five girls and four boys, my true” Hall of Fame”. I played Professional hockey for ten years, turning pro with the Montreal Canadiens in 1967 and played for several minor league teams as well as three NHL teams, Pittsburgh Penguins, Kansas City Scouts and Colorado Rockies. Post hockey I helped start the Lange and Micron skate companies and in 1984 started ITECH Sport Products and sold after twenty years to Mission Sports of California, at the time of sale Itech was the third largest hockey company in the world, behind Nike and Reebok. I am presently working with and serving on the Board of directors of several charities including Youth unlimited of Quebec, Executives available, Procure, for the awareness of Prostate cancer, Shriners annual golf tournament as Co-Chair, Father John Walsh’s annual celebrity golf tournament where proceeds go towards the funding of Nazareth House and this year Our New Anne’s house, serving on the Board for both, plus numerous speaking engagements for several other charities. Great to be retired.” Chip McIntyre Financial Advisor, RBC Dominion Securities Dominique Voyer “I am a proud Montrealer, loving our city despite the potholes, construction cones and traffic jams. I was given the opportunity to join the Board of Directors at the Nazareth House in 2012. As Father John had said « there aren’t too many young ladies who ask to be apart of this Board! ». I have been affiliated with the Nazareth House for over 5 years, dispensing medication to most of the residents as well as being a first line health care professional at their disposal. I am honoured to play a small role in the work that takes place at the Nazareth House by advocating the rights of some of Montreal’s most marginalized citizens, particularly those who struggle with mental health and addictions. This is not a sexy cause – we have no cute puppies to help us draw at the heartstrings. By helping these men and soon enough women at Anne’s House, we will make life better for some of the isolated and mentally ill members of our community. Making our world a better place for another human being? Now that’s sexy!!!!” John Corker President and founder JCOR construction, volunteer project manager for Anne’s House Dr. George Michaels “I have been a lifelong Montrealer. I am a graduate of McGill University Medical School and have been practicing family medicine as well as teaching at McGill for more than 25 years. In 2012, after a year-long battle with a life threatening illness, I decided to refocus some of my renewed energy towards community service. Having been a long-time friend of John Walsh, it was a clear choice to accept an invitation to join the Board of Directors of Nazareth House.” Louis Gascon; “I am a graduate of Loyola High School and College, McGill University Law School and was called to the Quebec Bar in 1971. I retired from active practice in May 2014. I served the community as Warden of St Veronica’s Parish, Director and President of the Foundation of Catholic Community Services, Director of The Pillars Trust Fund and also Director as Past President of Royal Montreal Curling Club. I am also a Director of Placement Potentiel Inc. a not for profit corporation whose mission it is to employ the handicapped and find meaningful occupation for approximately 95 such persons under Placement’s continued participation and supervision. I was recently invited to join the Board of Directors of Nazareth House and accepted after due reflection and in the hope of learning and participating in Nazareth House’s mission under the leadership and guidance of Father John Walsh in his crusade to assemble and assist the needy and neglected members of our community.” Marc LeMoyne  is a Project Manager, specializing in Marketing – Revenue Planning at CN Railways. He has been with the company since 1997. Prior to working with CN Rail, he gained international experience in Bangalore, India as a project leader with the software firm Daxxes. Fully bilingual, Mr. LeMoyne is an avid runner and has shared his business experience as a volunteer with the Nazareth House and the Villa Maria & Loyola High School parents committees. He has holds a Bachelor of Arts from McGill University and an MBA from Concordia’s John Molson School of Business. The Board members of Nazareth House are all volunteers, terms are open   Director Sheila Woodhouse Manager Nazareth House  Francis Cropas          Manager Anne’s House  Isis Gumbs Kitchen Manager Sandra McGee Intervention Worker/Volunteer Coordinator  Jennifer Willard Support Staff Michael Lavigne, Annie Delaney

[an error occurred while processing the directive]